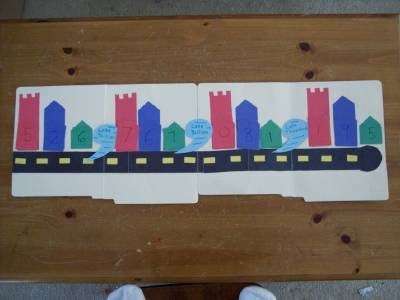 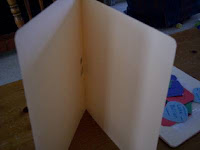 (*I just LOVE those*) on my Learning Environment post asking for more pictures of the Math-U-See Decimal Street Extended that I showed. It's an extended version teaching place value to the trillions. In 3rd & 4th grades a few of my children have benefited from this, so I thought I would share... 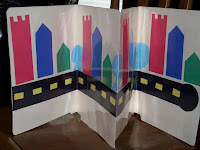 Start with 2 file folders. They will be attached on the middle edge (I used packing tape) so that they accordian fold flat or spread out into 4 distinct "pages." 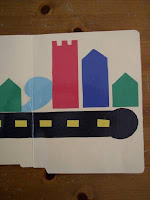 I then, cut out of construction paper 4 red hundreds' castles (NOT 400 castles / but 4 - castles that are for the MUS hundreds blocks) , 4 blue tens' houses and 4 green units' (ones) houses (one for each "page"). These aren't the normal width - I made mine 2" wide, but are the regular height to fit MUS blocks. I also cut a road out of black construction paper with a cul-de-sac at the beginning of the street (to remind you where you start counting).

The blacktop road looked boring, so I added yellow dashes in the middle of the street for color (it doesn't add anything for function).
The 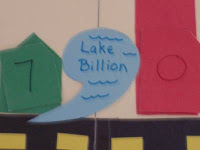 most important part of this are the lakes (in the shape of a comma) between the housing additions down Decimal Street. You'll need to cut 6 of these (I made mine in light blue for water) at the biggest width they are 2 1/2 " wide. 3 will go on the folds between the housing additions (where the commas go in a number to the trillions) and 3 will be the cards used to play Decimal Street. 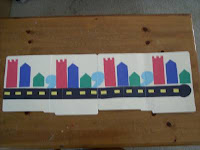 I used tape that I doubled over to make it sticky on each side and taped each house and all 3 lakes in place.
Next I made the number cards. 0-9 in each color the same width as the houses.

If you want to label the 3 lakes that are playing cards now you can. (Don't put any numers or label the lakes that you've pasted onto Decimal Street) They are labeled : 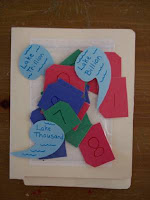 Then I had all the cards, lakes, and Decimal Street itself laminated at the teacher store. That way they wouldn't rip up the road while they played with it. I had to bring it home and cut everything away from the plastic (and each other), but that was an evening's labor of love.

I put a zipper pouch that has adhesive on the back of my decimal street after it was laminated.

Learning as we go.
Highland Dove Homeschool is...
Catholic, classical, Christ-centered, and at times just muddling through homeschooling.